Last week, I had the opportunity to attend the CDO Summit in San Francisco. It’s a great event because it brings together my kind of people – senior level data professionals who want to spend all day talking about developing a data-driven culture.  The theme of the event was “Leading the Data Pack,” and that’s exactly what the attendees are doing. The conversations were refreshing – and amazingly consistent. They ranged from building the right data team and Internet of Things to data governance and block chains. And many of the people who are truly succeeding with data – the ones who are using it to drive their businesses forward – are putting data governance at the forefront of their initiatives.

For me, a highlight of the event was the session I hosted with Theresa Kushner, VP Innovation at VMware. Theresa is one of the great data leaders, and has been evangelizing the benefits data governance for a number of years. VMware was facing incredible growth – faster than Microsoft. And when Theresa came on board, they did not have a formal data governance program in place. In her role as Chief Data Officer (CDO), Theresa spent her first 90 days talking to leaders across the business about data governance. And what she found was that although everyone agreed they needed governance, nobody actually wanted to be governed. I’m sure that sounds familiar to you. But Theresa was persistent. VMware determined that they needed a tool to help them manage data governance. But it couldn’t be just any tool. It needed to be something that people could understand, use, and access. That was the mandate from the CFO. So they selected Collibra.

Collibra now became the starting point to the data governance conversation. And what she realized was that data governance is all about governing the people who use the data. It’s about putting a process in place that everyone can live with, along with the policies to go with it. VMware stores these policies in Collibra. They also set smart goals for their data stewards, such as data quality, and measure them against these performance goals.

VMware has continued to mature their data governance initiative, and today, it’s part of the fabric of the organization. The CEO needed a 360-degree view of the customer, including everything they bought, their service orders, status of the orders, customer set score, etc. But everything that IT tried up until that point fell flat. So Theresa and her team built him an account view of each customer over a 10-year period. What they soon realized is that the dashboard they built was great, but the data is “lousy.” Through this project, they were able to identify why sales people were not entering their opportunity data.

Theresa also talked about the role of IT. At VMware, IT didn’t want to own data governance. But they do support Theresa and her team as a partner. They provide the monitoring. In my opinion, this is the most valuable type of partnership. The role of IT really should be to enable the business in a governance situation. It is great to see this partnership work well at VMware, because I’ve also seen the other end of the spectrum when it comes to IT and data governance. On the worst end, the strategy was completely system focused. As a result, the business was left hanging, so they went their own way and the IT initiatives fizzled on its own island.  The best scenario is where IT partners with the business and acts as a service. IT takes ownership of the technology that powers the data governance strategy, like Collibra.

It’s clear that Theresa and her team are on a journey. And they’ve come a long way. What used to be a tool that Theresa and her team had to force on people is now part of their day-to-day job. They manage reports and give them a seal of approval. And they’ve even trained their executives to ask “is this a sanctioned report?” They’ve made data governance truly business as usual.

Theresa is a great example of someone who is leading the data pack. And I’m honored that we at Collibra are part of her journey.

Where are you in your data governance journey? 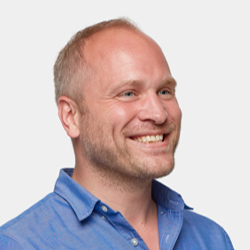 Stijn leads Collibra’s Data Office and is responsible for overall data strategy, data infrastructure and translating internal learnings into value for our customers.

My data product journey as a freshly graduated data scientist

Why data literacy matters now more than ever